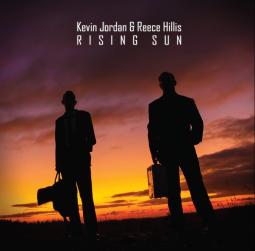 Scots duo, Kevin Jordan And Reece Hillis had a chance meeting at a studio in Fife back in 2012, discovered that they had a shared passion for delta blues and the rest, as the well worn phrase says, is history.Reece Hillis provides the guitar and vocals, Reece Hillis hits up the blues harp, or gob iron if you prefer and that’s it. Well except for a series of nine great songs, all penned from within the duo. It leads to “Rising Sun” being the sort of debut album that deserves to be heard.It’s amazing how the spirit of the Mississippi Delta can be captured so succinctly in the cold, damp hills of Scotland, but you really do get the impression that Jordan and Hillis have internalised the music so they’ve not only captured the sound, but also that real, deep down, spiritual feel.

They also manage to get a real good mix of tempo across the album, picking up the pace for the lighter numbers such as “Looking For A Woman”, which along with the likes of “Hey Hey Baby” add a sense of body to the album, giving it a real solid feel

If you like your blues with that pre-war influence then you really owe it to yourself to check out “Rising Sun”. Kevin Jordan And Reece Hillis have delivered an album that suggests they are the real deal when it comes to exploring the Delta sound.